Yalie Saweda Kamara is months away from a two-year term as Poet Laureate of Cincinnati and the Mercantile Library. She is originally from Oakland, California, whose family is originally from Sierra Leone. She holds an MFA from Indiana University Bloomington and recently earned a PhD in Creative Writing from the University of Cincinnati. She has published two collections of poetry and is the editor of a forthcoming anthology titled “What You Need to Know About Me: Youth Writers on Their Experience of Migration”. She will hold “office hours” at the Mercantile Library on June 10, June 24 and July 8 from 10 a.m. to 2 p.m. “I’ll be there to talk about poems people bring, poems that come to mind, and we can write together,” she said. Other dates will be announced next month on the Cincinnati Poet Laureate Facebook page. David Holthaus interviewed her about her work, her life and her inspirations.

Q: Congratulations on being named Poet Laureate. What does this mean for you personally?

A: It’s an incredible honor. It’s like being an ambassador of poetry. Part of what this entails is bringing arts programs to different places, not just formal institutions, but also informal places. And engage with groups of people who may not know they are already poets.

Q: “Cincinnati Poet Laureate” – that sounds pretty official.
A: It also means being a student of where you live and where you represent. I’m originally from California, Bay Area, and have lived in the Midwest for seven years, four of them in Cincinnati. Part of my responsibility is to study the city, which has an incredible history, political, artistic, social and environmental stories that I really look forward to learning more about.

Q: How were you drawn to writing and poetry?

A: I’m not entirely sure, but I have a few theories. My theory is that it has to do with being a first generation American. My family is from Sierra Leone in West Africa. English was not my first language. Creole was my first language, which is the lingua franca of Sierra Leone. So, I was sensitive to the nuances of the language in that way.

I also come from a family of storytellers. Not in a formal way, just the way people tell stories in my family has always been so interesting to me. Not just for entertainment, but to learn lessons, to teach particular things.

From a more practical point of view, my first name is Yalie, which comes from the term Jelimuso, which is the name given to a caste of West African storytellers. So, like, I never had the chance to be anything else!

[You can scroll to the bottom to read one of Yalie’s poems.] 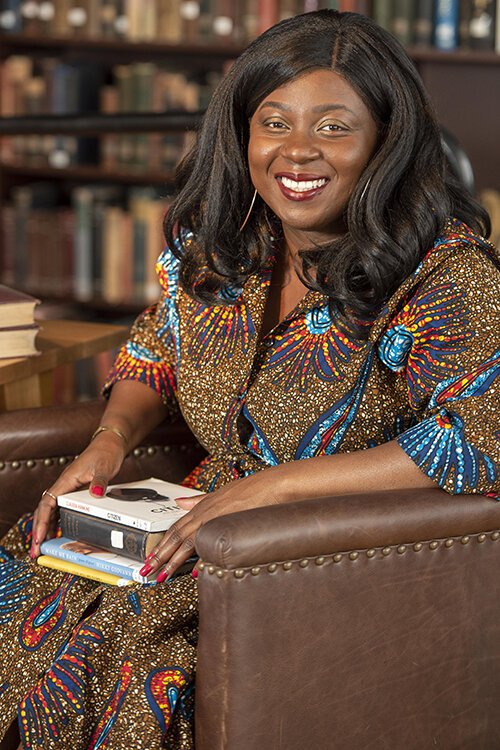 Part of my responsibility [as poet laureate] is to be a student of the city, which has an incredible history, political, artistic, social and environmental stories.Q: Was there a time or experience where you could see yourself as a writer and be sure that was something you could do?
A: I didn’t shine in any particular area in high school. It was a very competitive, very intense college prep school in Oakland, and I was home for spring break, and I was browsing the stations, and I came across our local PBS station and I saw a guy with a cool hat, and I was like, I wonder what this is about at 11 p.m.? It ended up being something called “Poetic License,” a documentary about America’s first youth poetry slam that took place years before. I had never seen anything like it. I didn’t know that was possible. I didn’t know what a slam was. It actually changed my life watching this documentary. It was then that I realized there was a space for young people to write.

Q: What kind of impact can poetry have today?
A: There is an argument that a song could be a poem. I’m thinking of the impact of hip hop and rap. Rap is poetry. It’s ubiquitous; It’s everywhere. Music is everywhere. Poetry is very subtly woven into the fabric of our cultures. In terms of the contemporary impact of poetry, I think of the work of Amanda Gorman and how she created a moment where so many people were able to engage and feel empowered by her work and were able to hang on to lines, images and messages. and metaphors. She helped create an entryway so people could feel like they could participate in poetry.

Q: There is so much competition for our attention, how can people get interested in poetry?
A: He implores people to dig into the uniqueness of their own narratives and their own stories. Poetry can act as a kind of light through which their stories can be seen. It reminds us that we are not alone and that there are others who have been through something we have been through. There is a community that is built through experience. It gives courage to read your own story.

Q: How important is it for students, just for people in general, to know poets like you, women of color, contemporary poets, rather than classical poets?
A: I find Walt Whitman’s language really interesting. There are things about his imagery and the boldness of his imagery that I find super compelling. So it was helpful for me as a writer to read some of those works. But it is more nourishing to read a fuller range of works, to expand the canon to include other voices, voices of BIPOC writers, queer writers, writers from different marginalized backgrounds, and hear these stories and understand that just as language is fluid, so is writing.

Q: Writing is difficult. Do you have a method or a discipline?
A: I am not a prolific writer. I don’t sit down and something crosses me and I write page after page. I’m not that kind of writer. Part of my method is to sit with things. I like to meditate on things for a very long time. I will keep an idea with me for a very long time, like years, sometimes or months, and I ruminate it in my head. Every day a few lines come to me, and I’m just going to sit with those lines. I could save them on my phone and just talk about an idea. I sit with things and then words come to me, but it’s not as if they invade me; I have to chase them away a bit.

Q: You mentioned that you might want to do events in atypical places for poetry and reach people who are not particularly sensitive to poetry. Any more specific thoughts on this?
A: I am very interested in serving marginalized populations. And what interests me is being in places where people don’t necessarily think they have a story worth sharing. Perhaps it stems from my journey as an educator and as a young person from a marginalized background, as a first-generation black American woman not necessarily knowing the power of my story. So, these will be places that have people who can share that feeling. 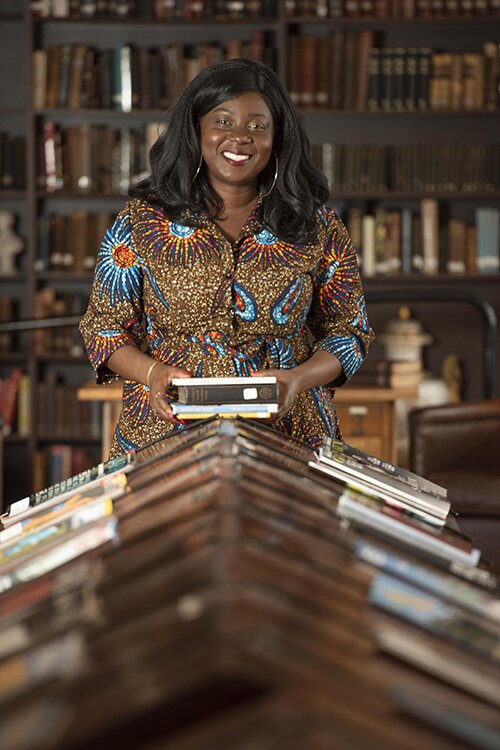 On location at the Mercantile Library, Kamara shares her poem, Besaydoo, from the historical magazine display.Q: Do you draw on your experience as a source of your ideas?
A: This is often the case. But my experiences are not only biographical experiences, they are also my interests, the things that fascinate me. Many of my poems have been biographical or historical as they relate to my life and my family. I’ve done a lot more writing that requires serious research. And thinking about how you write a poem based on a life outside your own, where there’s nothing you’ve shared with that person but breathing on earth.

Sipping coffee in my mother’s Toyota, we hear the birdsong of two teenagers
in the car park: Goodthey say, Besaydoothe other returns, reaching
one for the other. Their cup-shaped handshake goes off like the first big firecrackers of summer,

their fingers tremble as if solving a Rubik’s cube just beyond our field of vision. Moments
later, their Schwinns head in opposite directions. My mother turns to me, revealing me
John Waters mustache milky foam on his upper lip, Wetin dem bin say?

Besaydoo? Nar English? she asks, tickled by this tangle of new language. Very well.
Be careful man I separate each syllable like string cheese for her. Oh yah, dem nar true padi,
she smiles, surprisingly broken by the tenderness expressed by what half my family might call

emergency treatment. Besaydoo, we whisper across the land. As
a word from the depths of a place too newborn for the outside, but we
saw these two boys doing it, in broad daylight, under a decadent and ruinous sun.

Originally published in The Adroit Journal